“Recent success in reducing carrier bag (PE) and drinks bottles (PET) waste in Europe suggests lifestyle adjustments are possible, but plastic is ingrained in modern society and a future free from plastic seems unlikely. Complete alteration of human behaviour is difficult to attain, as indicated by the fact that only 9% of plastic waste is recycled3. Therefore in addition to these three solutions to the plastic waste problem (reducing, reusing and recycling), we need a fundamental change in order to make a noticeable impact on the plastic waste seeping into our environment. A new plastic future in which biodegradable polymers replace conventional plastics could be the answer.”
source: https://www.nature.com/articles/s41467-018-04565-2

“Some bacteria think plastic is fantastic
Bacteria isolated from outside a bottle-recycling facility can break down and metabolize plastic. The proliferation of plastics in consumer products, from bottles to clothing, has resulted in the release of countless tons of plastics into the environment.
Yoshida et al. show how the biodegradation of plastics by specialized bacteria could be a viable bioremediation strategy (see the Perspective by Bornscheuer).
The new species. Ideonella sakaiensis, breaks down the plastic by using two
enzymes to hydrolyze PET and a primary reaction intermediate, eventually yielding basic building blocks for growth.”

Thanks www.trillionsgmbh.com for the sources

“ReverteTM  is an oxo-biodegradable additive which is added directly into the film manufacturing process to standard PE, PP & PET to impart this property, with almost no physical impact on the processing of the polymer.”

“These polymers undergo controlled degradation through the incorporation of a ‘prodegradant’ additive (an additive that can trigger and accelerate the degradation process). These polymers undergo accelerated oxidative defined degradation initiated by natural daylight, heat and/or mechanical stress, and embrittle in the environment and erode under the influence of weathering.Reverte™ produces a plastic product with equivalent performance characteristics than the present non-degradables, is cost competitive and results in a product will totally and harmlessly disintegrate in multiple environments, commencing at a predetermined time.”

“The vision of INDIANES is that banana fiber is the solution to the environmental crisis caused by the textile and fashion industry. Banana fiber was used for centuries by Colombian communities and does not require any water or extension of land for cultivation, since it is obtained from the residues of banana agriculture.”

This article by Anne Marie Mohan, senior editor at packworld.com shows every advancement made on biopolymers applied on the packaging industry.

The industrial sector is at its beginnings but huge players such as PepsiCo are partnering with companies active on developing new bopolymers, which are seen as a natural evolution of the actual plastic industry.

New kinds of manufacturing byproducts are being used to produce biopolymers.

Mixed with traditional plastics, these materials not only reduce drastically the carbon footprint of the products on which are applied, but can offer superior  properties.

Using a plant-derived solvent called GVL (gamma-Valerolactone), University of Wisconsin-Madison Professor of Chemical and Biological Engineering James Dumesic and his team have developed an economical and high-yielding way of producing furandicarboxylic acid, or FDCA. One of 12 chemicals the U.S. Department of Energy calls critical to forging a “green” chemical industry, FDCA is a necessary precursor to a renewable plastic called PEF (or polyethylene furanoate) as well as to a number of polyesters and polyurethanes.

“Until now, FDCA has had a very low solubility in practically any solvent you make it in,” says Ali Hussain Motagamwala, a UW-Madison graduate student in chemical and biological engineering and co-author of the study. “You have to use a lot of solvent to get a small amount of FDCA, and you end up with high separation costs and undesirable waste products.”

Motagamwala and colleagues’ new process begins with fructose, which they convert in a two-step process to FDCA in a solvent system composed of one part GVL and one part water. The end result is a high yield of FDCA that easily separates from the solvent as a white powder upon cooling.

The team’s techno-economic analysis suggests that the process could currently produce FDCA at a minimum selling price of $1,490 per ton. With improvements, including lowering the cost of feedstock and reducing the reaction time, the price could reach $1,310 per ton, which would make their FDCA cost-competitive with some fossil fuel-derived plastic precursors.

“We think this is the streamlined and inexpensive approach to making FDCA that many people in the plastics industry have been waiting for,” says Dumesic. “Our hope is that this research opens the door even further to cost-competitive renewable plastics.” 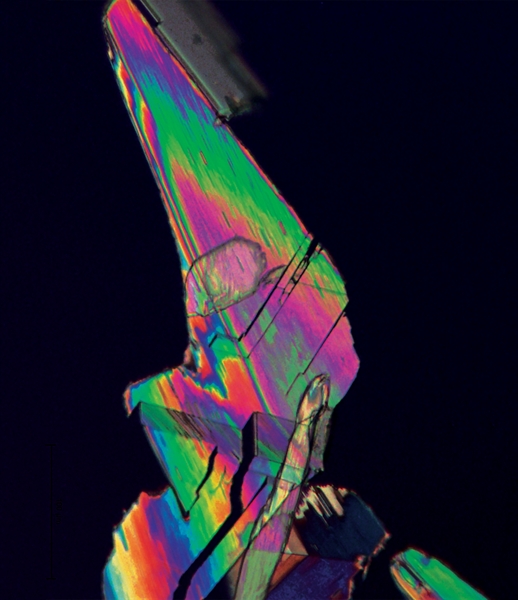 A crystal of furandicarboxylic acid, or FDCA, a plastic precursor created with biomass instead of petroleum.
Credit: UW–Madison image by Ali Hussain Motagamwala and James Runde